Home » The Life of Ravi Naidu: Tragic Story Of An Uncommon Achiever
Bangalore

The Life of Ravi Naidu: Tragic Story Of An Uncommon Achiever

They say life is a rollercoaster ride, filled with its share of ups and downs.

All of us would have come across many rags to riches stories at some point in our lives, which inspire us to follow and believe in our dreams. While they serve as a great source of motivation, they may in some scenarios induce a false sense of hope and reality amongst people.

However, we would have certainly heard of very few “riches to rags” stories in comparison to the former. While they may end in peril for the person in focus, they often provide an opportunity for great learnings and realization for viewers and readers. Such stories also sometimes firmly establish reality, and helps us keep our feet firmly planted on the ground without getting carried away by unrealistic ideologies.

These stories also help us to maintain a practical and stable point of view of the world around us and help us embrace reality and learn to love and be grateful for what we have. It is only after learning such stories that we understand the true value of what we possess and how privileged we are.

We at Masala Chai Media present to you one such story- a story of riches to literally rags – of Mr. Ravi Naidu. We come across Mr. Ravi Naidu on the side of a road he is usually found at, near a garbage dump where people often come to toss their trash in the open.

Born in 1967, Mr. Naidu is 53 years old and lives in the vicinity of the area we meet him. His residence is an abandoned house away from the main road.

“I am struggling now and have no one to help me”, he resents. “I can barely manage to afford food and petrol for my bike.”

So what does he do every day?

“I pick papers and bottles from the garbage and sell them to get about Rs 100-150, which I use for food and petrol.”

But this was not how he had lived all his life. A satisfactory life with a good livelihood, with fame and popularity by-products of his achievements. So what happened and how did he end up here? We take a closer look.

He was a social service worker who used to provide services for various social causes and has travelled to multiple states and countries for such causes. He says he had got a special passport for social work clearance which permitted him to travel across places to provide social work.

On returning from one such campaign for social work on HIV, tragedy struck. He was attacked by over 2500 honey bees and as a result, had lost his right eye.

Another interesting observation is that of an attractive and customized bike, which seems like it does not belong to Mr. Naidu at first glance until he explains the story behind the motorbike. “Bal Thackeray [Shiv Sena founder] gifted me this bike,” he says with pride.

He shares with us a glimpse into his glory days when he was a local star with publicity wherever he went. He was quite popular during his time in the early 2000s and was hailed as a hero with news coverage in various languages throughout the country. His popularity was acknowledged from Rajasthan in the north to Kerala in the south. 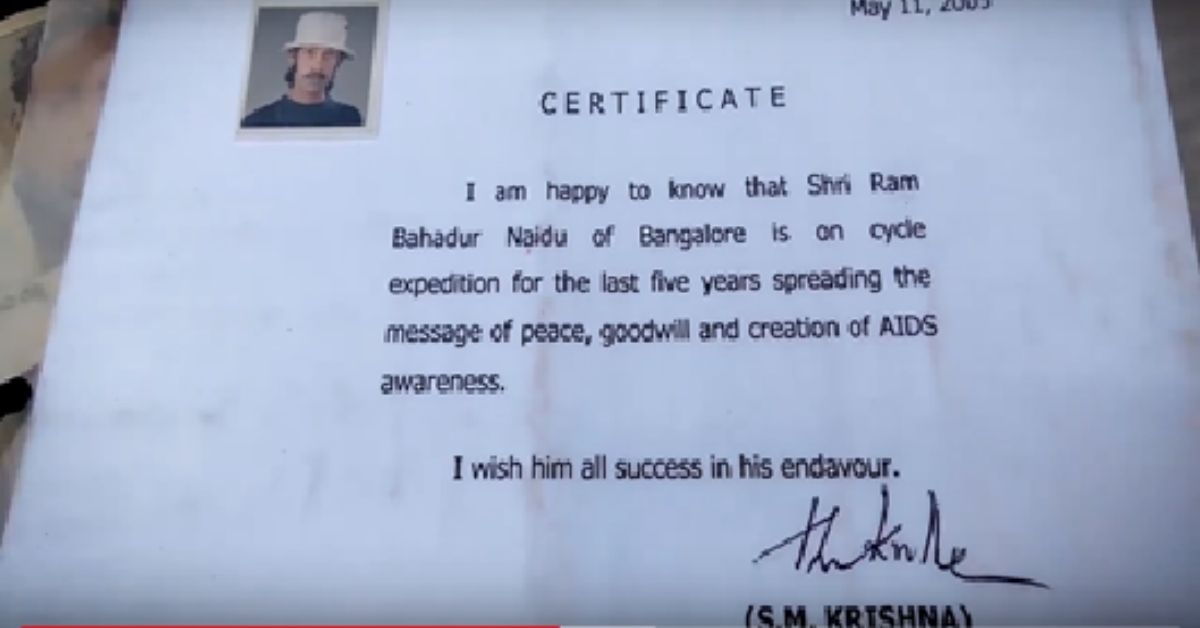 He proudly invites us to show us his achievements and certificates, including laurels from Vilesh Rao Deshmukh and former Governor S.M. Krishna, among others.

An All India Cyclist, he has travelled over 2,00,000 km on his cycle and motorbike. He does not prefer keeping a mobile phone and does not have a bank account to hold his money. 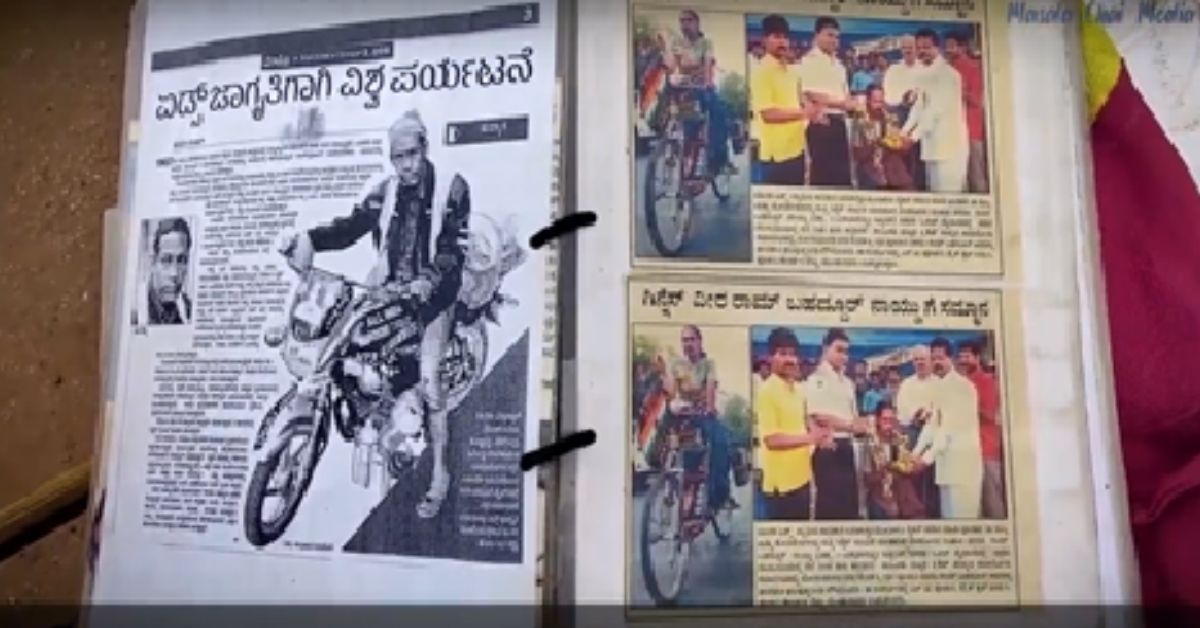 But by the time he returned home after travelling the world, there was no family to come to. He had lost his family and no house or belongings left behind. All his properties had been sold off and he was left at the mercy of life to take care of himself and make amends out of what he was left with.

“I can only manage to eat one meal a day with the money I make and have to go about asking for help for other meals. I take it as fate is not in my favour,” he explains.

He also shares that he had approached multiple sandalwood stars asking for help but to no avail. None of the stars had agreed to help and support him financially.

His current situation, where he survives on the garbage and sells items to barely make ends meet, is in stark contrast to the high points of his life, where he had everything from fame and a popular lifestyle- including a Guinness World record- in addition to a stable livelihood and official acknowledgements and testimonials from people in positions of authority.

On asked about his closing remarks, he adds, “I was an All India Border Cyclist, Guinness World Record Holder, and have done several HIV campaigns across the world. I have come across a lot of people but no one comes forward to help me. I have been picking rags and plastic for the last few years. It has become tough to arrange for my food. I am struggling. I am grateful for this interview and thank you to all the viewers. Jai Hind.”

Masala Chai Media hopes and prays for the well-being of Mr. Ravi Naidu. So to help Mr. Ram Bahaddur Naidu, we have created a Crowdfunding campaign through Milaap.

Milaap is one of the most popular and trustworthy platforms to raise funds. On behalf of Mr. Ram Bahaddur, Milaap will receive all the contributions you are going to make. Once the money is accumulated, Milaap will directly give the collected money to Mr. Ram.

Here is the link to contribute: https://milaap.org/fundraisers/support-ram-bahaddur-naidu
Please try to donate whatever amount you can. No contribution towards a good cause is a small contribution. Jai Hind.

Karnataka To Slap Fines On Those Violating Covid Protocols

If 30% Muslims Unite In India, 4 Pakistans Will Be Created: TMC Leader