The producers of Bigg Boss Kannada season 8 have decided to discontinue the ongoing season as Karnataka is set to go into a full lockdown for 14 days starting Monday.

Big Boss canceled due to rise in covid cases

On Friday, the Karnataka government announced that a total lockdown would be imposed in the state amid the raging second wave of coronavirus. And now, according to the new lockdown rules, the government has ordered makers to suspend TV shows and films.

Parameshwar Gundkal, Business Head of Colors Kannada, announced that season 8 of Bigg Boss Kannada had been canceled due to the Covid situation. 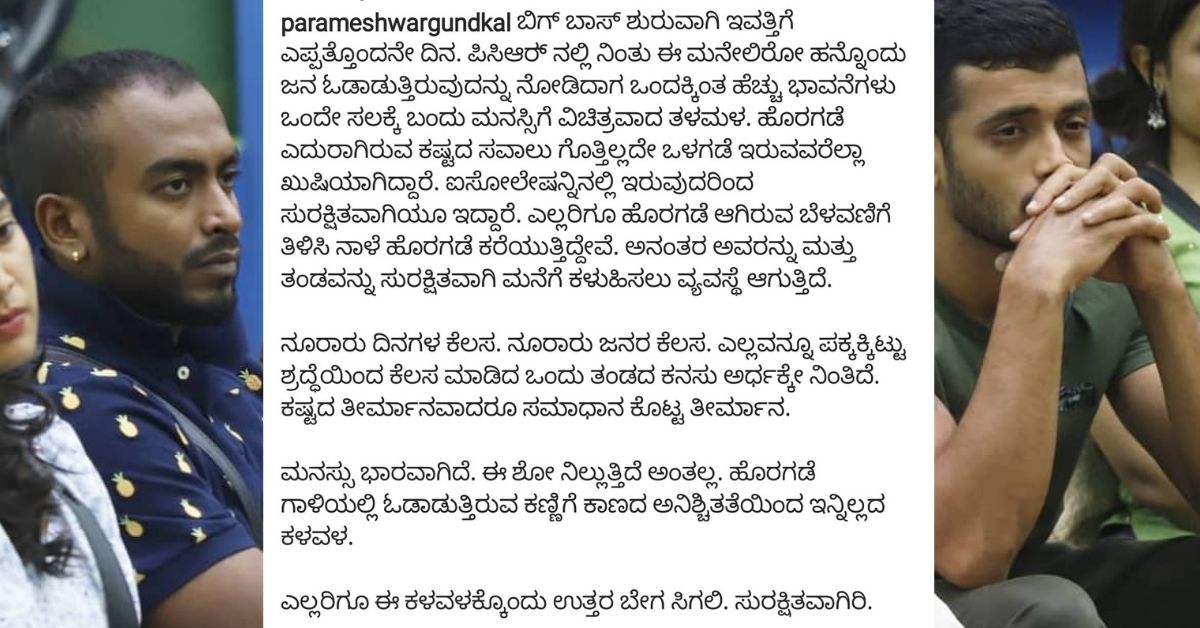 “Today is the 71st day since Bigg Boss (season 8) began. I feel emotionally confounded looking at 11 contestants in the house through these cameras. However, everyone inside this house is happy as they are unaware of problems on the outside. They are also safe since they are all isolated,” he said.

“Everybody will be notified about what’s going on on the outside, and they will be brought out. All housemates and crew members will be safely taken to their homes, and the arrangement for the same is underway. The dream and efforts of hundreds of people have been cut short,” he adds.

A hard decision to make

Parameshwar further told that how difficult it was to take such a decision. “Even though it was a very difficult judgment to make, we are happy with it. Our hearts feel heavy. Not because the show was discontinued but on account of an invisible virus that is causing all the tragedy,” he writes on Facebook.

Host Sudeep had halted hosting the weekend episodes from the last three weekends because of his ill-health. Despite getting recovered, he was not able to shoot because of the lockdown limitations.

“The show is canceled because even if it’s a few members gathering to shoot, it isn’t supporting the current situation. I understand viewers’ frustrations, but I’m sure we all accept that we need to support the rules laid. So let’s hope for the best, and conceivably, we can be back with weekend episodes asap. Love & Hugs (sic),” Sudeep tweeted earlier.

Cancelled coz even if its few members gathering ,,,it isn't supporting th current situation.. I understand viewers disappointments ,,but I'm sure we all agree tat we need to support the rules laid. Let's hope fo the best n hopefully we can be bk wth weekend episodes asap 🤗🙏🏼 L&H https://t.co/76uzSOEytc